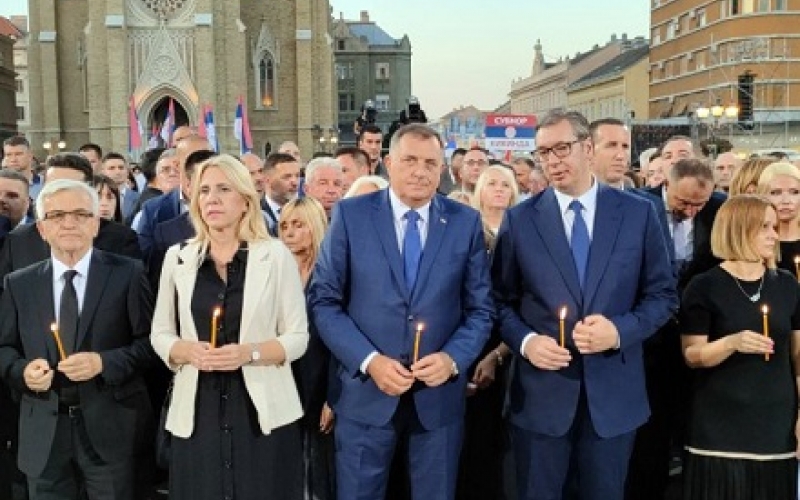 The President of the National Assembly of the Republic Srpska Nedeljko Cubrilovic attended last night at Liberty Square in Novi Sad central commemoration of the 27th anniversary of the big Serbian suffering in Croatian military-police action “Storm".

The Day of remembrance for the victims and refugees in “Storm” was attended by the President of the Republic of Srpska Zeljka Cvijanovic, the Serbian member of BiH Presidency Milorad Dodik, and the President of Serbia Aleksandar Vucic.

His Holiness Patriarch Porfirije addressing the central event of commemoration of the Day of Remembrance for victims and refugees in the Croatian military action “Storm”, said that our remembrance is not “evil remembrance” and that we remember the witnesses of the survived people in order not to be later told that the crime and the calamities had not happened at all.

“We gathered in order to remember in prayer the forcible exodus of our people from the territory of Dalmacija, Banija, Kordun, Lika, and West Slavonija,” said the Patriarch after the commemoration for the victim of “Storm”, saying that we have to forgive because it is our Evangelical commandment, but we must never, will not and can not forget the victim and the sufferings.

Patriarch Porfirije said that we must not forget the victims and destructions of “crystal night” in Zadar, the execution of old and weak people in Medak and villages of Lika, horrific terror and killed people in houses and buildings along Pakrac and villages of Slavonia.

“All of these are little pieces in the mosaic of our suffering and crucifixions, together with Sisak, Glina, and Jasenovac. We have with us today people who survived and witnessed all those sufferings, who keep and pass to us their remembrance. We worship and remember their suffering and sacrifice” aid Patriarch.

Patriarch highlighted that Serbs would gather in prayers as they did in Novi Sad.

“In Serbia, we do not ask which faith are you, which nationality are your parents. The Serbia like this we love, and we pray for it to stay like that. There is always a place for everyone, for each name and soul, because God does not make the difference, every man has equal value in front of God” said Patriarch Porfirije.