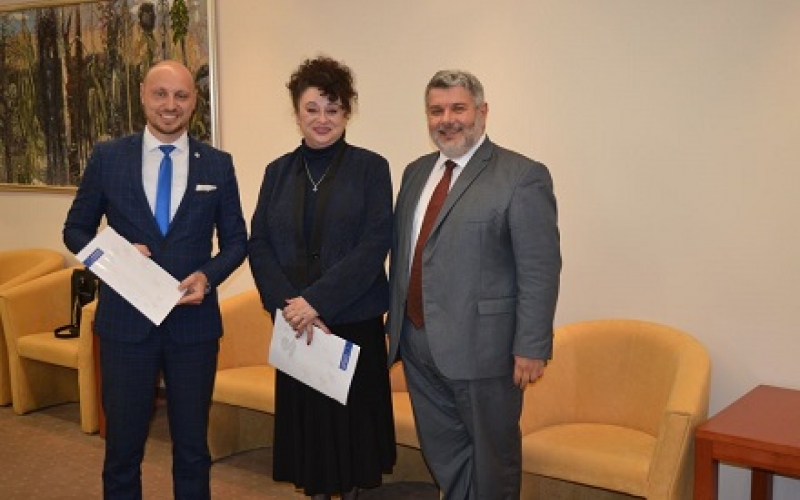 The representatives of the delegation of the EU in BiH handed today to the leadership of the National Assembly positive Opinion of the European Commission on the application of BiH for the status of the candidate for the EU membership and the Analytical report, which for the first time accompanies the Opinion and which compares the situation in BiH with the principles which are implemented in membership countries.

In the name of the National Assembly of the Republic of Srpska the documents has been passed to the vice presidents of the parliament, Sonja Karadzic Jovicevic and Milan Petkovic.

The representatives of the EU delegation emphasized that the European commission takes very seriously BIH application which is the confirmation that the EU is devoted to supporting and giving guidelines to the country in taking reforms on its path toward EU integrations.

The Opinion identifies 14 crucial priorities which BiH needs to complete in order to gain recommendation for the opening of the accession negotiations and also comprises overall guidelines for gradual reforms.

Key priorities comprise the areas of democracy, functionality, the rule of law, principal rights and the reform of the public administration and these are the basic of the process of accession to the European Union.

This Opinion is the basic for the discussion in the European Union Council which needs to decide about further steps on the BiH path toward EU.

The representatives of the EU stressed that concerning all this it is important to form power on all BiH levels which is stated in the Commission recommendations.

They also emphasized the willingness of the EU delegation to support the National Assembly during the process of law harmonization, having in mind this is a long and huge process.

The vice president of the National Assembly Sonja Karadzic Jovicevic stressed the Republic of Srpska commitment to EU integrations.

She expressed satisfaction with the fact that BiH's EU integrations are not conditioned by membership in military alliances, specifically NATO, stressing that this facilitates cooperation.

Vice President Milan Petkovic said that the representatives of the Republic of Srpska are satisfied with the positive Opinion of the European Commission and added that he hopes for good cooperation in the forthcoming period.