Wigemark: A significant progress has been made in fulfilling the 'European commitments' 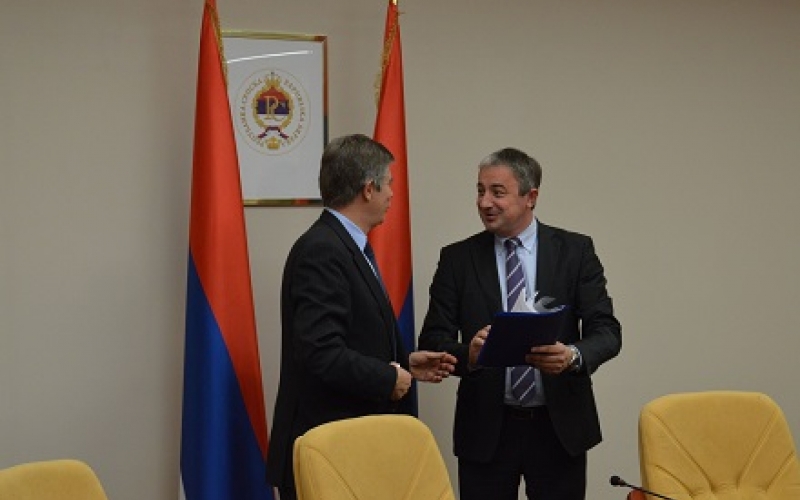 Head of the EU Delegation in BiH Ambassador Lars-Gunnar Wigemark met today members of the Committee for European Integration and Regional Cooperation of the National Assembly of the Republic of Srpska  and handed  the report of the European Commission on the progress of BiH for 2015.
"In the past 12 months there has been significant progress on issues relevant for this country and for European integrations," said Ambassador Wigemark to members of the Committee.
The officials agreed that the role of legislative power in the context of the harmonization of the regulations in  the Republic of Srpska and Bosnia and Herzegovina with the European Union is very important in the process.

It was stressed that the socio-economic and legislative reforms are very important on the path towards the European Union and that the constitutional and political issues are not supposed to be obstacles to the development and improvement of these areas.
It was pointed out that it is very important to continue the progress with regard to the implementation of the Reform Agenda.

The report, which was symbolically handed to the head of the committee  Branislav Borenović, highlights the serious concerns of the EU when it comes to freedom of expression, hate speech, the situation in the media, particularly public broadcasters and slow reform of public administration, the high rate of youth unemployment, the use of emergency procedures for the adoption of the law, inefficiency of the judiciary.

Borenović informed the Ambassador Vigemark on the work of the Committee concerning  the approximation of the laws of the Republic of Srpska with European legislative and stressed that it was the Committee for European Integration that proposed the adoption of the Declaration on condemning hate speech, at the last session of the National Assembly.

It was concluded that the Committee  for EU Integrations of the National Assembly of the Republic of Srpska  will continue to maintain intensive contacts with representatives of other committees of parliaments in BiH in order to maintain a positive atmosphere and to speed up the reform process towards the EU.