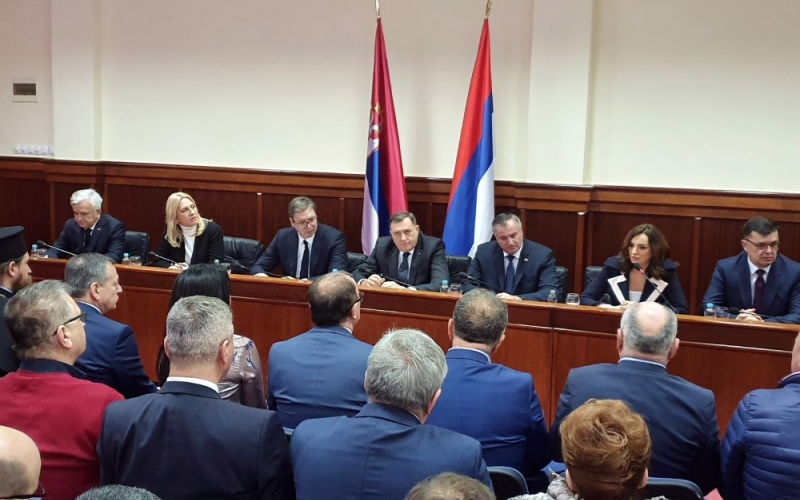 He said that Serbia wants to encourage the survival of the Serbian people at its birthplaces and assist the development of the Serbs, and that it will allocate 300,000 BAM for the Gymnasium and the Mechanical Engineering School in Mrkonjic Grad, and 200,000 BAM for the Health Center.

"We have made a decision to financially assist the neighboring municipalities of Šipovo, Jezero, Ribnik and Serbian Kupres," said Vučić and thanked the Mayor of Mrkonjić Grad DivnA Aničić and the members of the local parliament for awarding him.

Vučić emphasized that the most important thing is that Serbia and Republic of Srpska work together and thanked the Srpska leadership for understanding how important it is to preserve people and to always be together.

He is therefore grateful to Serbian Presidency Member Milorad Dodik, Srpska President of Republic of Srpska Zeljka Cvijanović, President of the National Assembly Nedeljko Čubrilović, Prime Minister Radovan Visković, Council of Ministers Chairman Zoran Tegeltija and all the people who invested energy to make Serbia and Srpska successful and to maintain that success.

President Zeljka Cvijanović said in Mrkonjić Grad that it is of great importance that today's meeting with Serbian President Aleksandar Vučić discusses concrete and practical issues and problems that Serbian citizens are facing and that Serbia can and wants to resolve.

"I thank the President of Serbia for his visit and meeting and what particularly pleases me, apart from the help for the school in Mrkonjic Grad, is the fact that we have also talked to representatives of the business community as a whole to see how we can strengthen the economy of this municipality. but also the whole Republic of Srpska and we come to certain solutions,” emphasized Cvijanović.

Serbian Presidency member Milorad Dodik said that the visit of Serbian President Aleksandar Vučić to Mrkonjic was the result of good work and relations that Srpska has with Serbia on a continuous basis.

"We will continue on, we are going to Drvar to open the fabric. We are also waiting for other premises in Srpska that we will visit in the next few months, "Dodik said after the meeting.

After the meeting in Mrkonjic Grad, the President of Serbia, along with Serbian officials, visited the municipality of Drvar, where he opened a branch of Comercial Bank and the facility of Jumko.