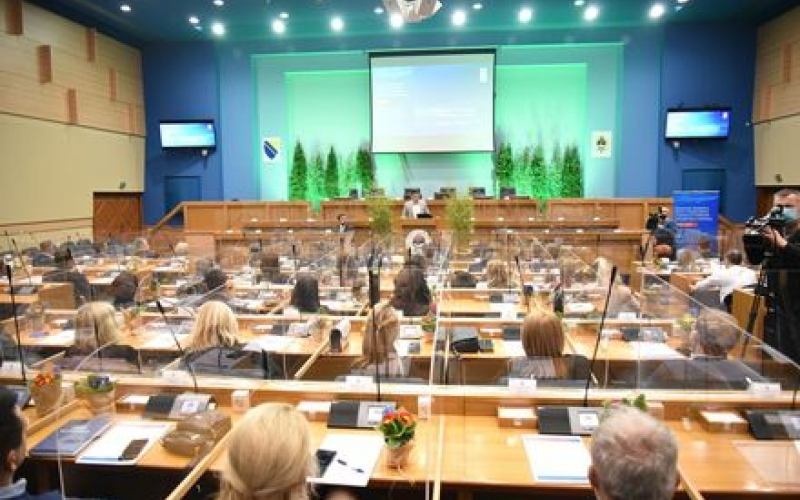 Since 1990, the Republic of Srpska and BiH globally have suffered 23 natural catastrophes due to climate changes and global warming. This resulted in enormous financial deficits, so it has become essential to increase renewable energy sources and a green economy, was the message from the Conference organized in The National Assembly of the Republic of Srpska.

The Vice President of the National Assembly Denis Sulic stressed the importance of the debate on this issue, for the public to be informed about this problem and the problems we can expect due to climate change.

Srebrenka Golic, the Minister on spatial planning,  architecture, and ecology in the Government of the Republic of Srpska, said that at least 46 lives have been lost in these catastrophes and that a direct loss on BiH level has been estimated at 5,5 million dollars.

"The effect climate changes have on the economy, and what is more important on human lives shows us that it is essential to seek for renewable energy sources with a low level of CO2, green economy and strongly controlled gases emission with the greenhouse effect," said Golic.

Addressing the Conference, she said that the aim is to protect the most affected sectors by climate change.

In our case, agriculture is the most affected one. So, we must do everything to adjust agricultural production to climate conditions, added Golic.

She said that the line Ministry as the contact institution for BiH concerning the Framework Convention of the UN on climate change has made great efforts to come to financial resources needed for the realization of the activities aimed at alleviating and adaption of the negative effect of climate changes, which more and more affect the life in BiH.

A resident representative of UNDP for BiH Steliana Nedera said that the Conference aims to oversee everything that has been already done as well as plan the next steps in overpassing these issues of climate change bad effects.

"Much has been done considering this area. So, it is our pleasure we have been part of this progress. Acting against these problems cannot wait, so concrete measures must be adopted as soon as possible" said Nedera.